Empa researcher Maria Ibáñez was awarded the annual Ruzicka Prize by ETH Zurich. This makes it the second Empa researcher to join the long list of prize-winners dating back to 1957. 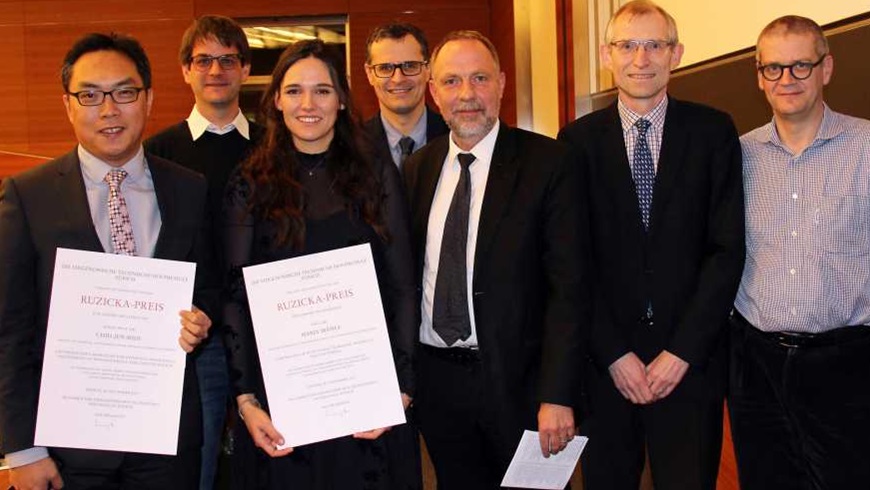 The two Ruzicka prizewinners Maria Ibáñez and Chih-Jen Shih
Last week, Maria Ibáñez was awarded the prestigious Ruzicka Prize of ETH Zurich. Her work on the "bottom-up" engineering of thermoelectric nanomaterials from nanoparticle components was honored. Ibáñez joined Maksym Kovalenko's group at Empa and ETH Zurich in 2014. In the summer of 2018, she will move to Vienna as Assistant Professor at the Institute for Science and Technology of Austria (IST Austria). She is already the second person to be awarded the Ruzicka Prize by Empa - together with her boss, Maksym Kovalenko, who received the 2013 prize.
The Ruzicka Prize, which has been awarded since 1957 and is named after Leopold Ružicka, an ETH professor and Nobel laureate, is considered one of the most important prizes for young scientists in the field of chemistry in Switzerland. Many of those who, at the time of the award ceremony, initially held the status of private lecturer, group leader or assistant professor were or are employed in leading positions in well-known research institutions or industry; several were appointed to professorships.
Informationen
Dr. Maria Ibáñez
Thin Films and Photovoltaics
Tel. +41 58 765 60 43